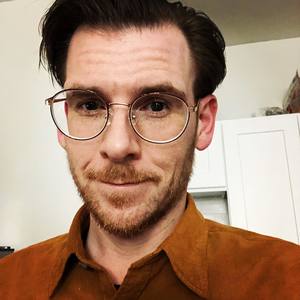 First off, reps are more important than me talking, but if you want to know way too much about me, here you go:

I like focusing on committed, grounded scene work and weird organic stuff. I also like to focus a lot on being in the moment, fully engaged with your scene partner, actively listening and reacting rather than thinking of the "correct" move or what not to do.

What I’m interested in most is exploring just what can be accomplished with improv as an art form and trying new things with it. I feel there is a lack of focus on motivated improv, improv that is trying to DO something with a goal. These are the areas I like to work on.

I started taking UCB classes in May 2011, starting with the sketch curriculum before beginning the improv curriculum in April 2012. I have completed and been approved for Advanced Study for both curriculums since late 2014 and approved for the Academy since 2018. I've also teched improv class shows at UCB Chelsea/Hell's Kitchen for three years, so I have seen EVERYTHING.

You may have seen me perform with various teams over the years - including Rolf, Black Dog, The Obelisk, and my longest-running indie improv team, Umbrellaman - or in Advanced/Academy Performance class shows at UCB, including Final Frontiers and The Art House Improv Movement. You may have seen sketches I've written and performed with my team Please Clap.

Rate: $20, but it's variable, contact me for details. If what you're doing is exciting, I probably won't charge.
Email: clifhenning@gmail.com