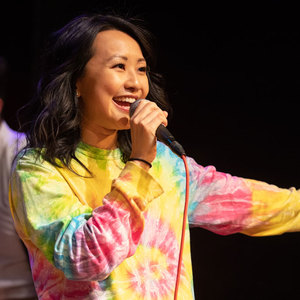 Hello! Helen is excited to coach sketch comedy. She is a founder, writer, performer, and producer of Overstep Comedy. Overstep is an Asian-American sketch team founded in New York dedicated to increasing representation in comedy. Overstep was a headliner of the Asian Comedy Festival (The PIT, 2020), a featured act at Sketchfest (The PIT, 2019), and selected to perform at Diverse as F*ck Festival (Caveat, 2019). The group has received press in The New York Times, Time Out New York, Comedy Cake, and AsianCrush. Their digital shorts have screened at Asian American Film Thing at Caveat.

Helen taught a sketch writing workshop at the Asian American Writers Workshop and received unanimous feedback that students would recommend the workshop to family and friends. She enjoys working with students of all levels to hone their voices, recognize their progress, and use “tools not rules” of sketch writing and performing. She runs a tight ship of a writers room and encourages collaboration among diverse groups.

Helen has written and performed sketches at The Peoples Improv Theater, the Upright Citizens Brigade Theatre, and Caveat. Helen studied sketch writing with Anna Drezen (SNL, Reductress) and screenwriting with Emmy-award winning writer and producer Xandra Castleton. Her original comedic TV pilot made it to the semifinal round of the 2019 MACRO Episodic lab, powered by the Black List.

Born and raised in metro-Detroit Michigan, Helen has lived in New York for over a decade with brief stops in Paris and San Francisco. She has a background in design, dance, and business.

Helen’s availability is flexible. Contact her on ways of working together!