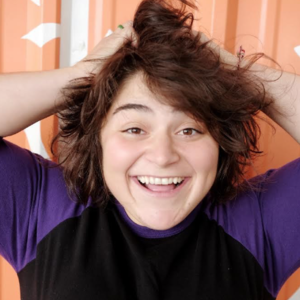 Jen Clark is a “V” fun, wild, whimsical, effervescent, subversive, character comedian and improvisor! She performs weekly in the interactive Off-Broadway show Accomplice and on the PIT improvisation House Team, Vicariously Yours,.

Jen Clark births out of vaginas frequently in her solo show Mein Künt and recently started a Kült. You should join!

She studied improv with the Upright Citizens Brigade, The Peoples Improv Theater and received a BFA in Film from The Academy Of Art University. Jen teaches miscellaneous Drop In Classes at The People's Improv Theater where she also works as the Creative Director of PITtv.