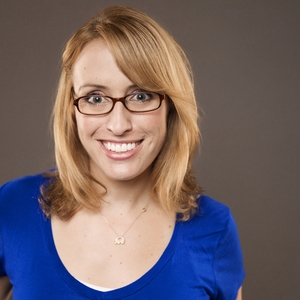 A little about me. I'm a Michigan girl who got my BA in Theatre in Ohio. I moved to Chicago after graduating to study improv. I studied and performed at The Second City, iO, The Annoyance and The Playground. I was on the house Herald team, Night Fight, at iO for a couple years.

I moved to Orlando to improvise full-time at Disney World, and was in the ensemble at SAK Comedy Lab in downtown Orlando for three years.

In NYC, I was on the MegaWatt team, Party Lions - at the Magnet Theatre. I played with ComedySportz NYC for a year and am an active member of The Story Pirates. I currently tour the country with Broadway's Next Hit Musical, TIYL and perform Friday nights at The Pit with my musical house team, VERN.

I'd love to coach your musical or straight improv group! Give me a call! Or a text. Or a paper airplane.