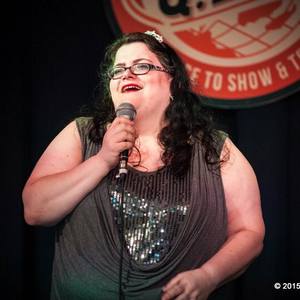 Kimberly "Sparkle" Stewart is an improviser, writer and director with a taste for writing goofy songs on the ukulele. She sometimes produces comedy shows and is always working on a video project. She has been the member of many improv teams, and currently performs with one of her favorites, The Seattle Spaceman! Sparkle works on the annual Cinderblock Comedy Festival and co-produced the first annual TwoProv Tournament at QED.

Sparkle has studied at Uprights Citizens Brigade, has a BFA in Acting from Wayne State University in Detroit and an MFA in Directing from Actors’ Studio Drama School/New School University here in New York City. She’s well educated in playing pretend!