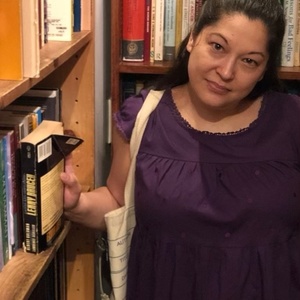 I enjoy game of the scene improv but also love a good relationship scene or one inspired by strong character work. I've had the privilege of studying with terrific performers including Louis Kornfeld, Peter McNerney, Will Hines, Jaime Moyer, Alexandra Dickson, Sebastian Conelli, Vinny Francois and many other fantastic performers and educators. Speaking of which, Elana Fishbein and Jason Perez are fully responsible if I manage to teach you anything, because they taught me how to do that.

In addition to improv I've also studied clowning with Christopher Bayes, stand up with Christi Chiello, and character with Jon Bander and Hal Rudnick.

I've performed on house improv teams at the Armory (Varsity Bowling), the World's Greatest Improv School (Firecracker), and Rubbish Comedy Collective (Octopus Queen). At the moment I perform regularly on Highwire Improv with my two-year old Zoom indie teams, Jace Spam and Dolly Lana, and I can also occasionally be found at Magnet Theater, where I study and am a Big Sib.

I'd be delighted to help you along on your improv journey — online or fully vaxxed in person — in whatever way I can. Looking forward to hearing from you :)